It’s fun to create bad guys, and the Moebian Sixth are bad to the bone.

To me, in games just like novels, the bad guys have got to be interesting, not just cannon fodder, and that’s hard to pull off in a game because there are going to be a lot of them coming at you as you dig in and play, and some of them will be cut down quickly (if you’re doing your job right!).

It’s pretty much impossible to build them as characters, or establish any depth of personality, because there isn’t the space or the time, and you’re not going to have the sort of interaction with them you’d get in a novel or a piece of prose. You might get to learn about a bad guy’s motivation or impulses in a book, but in a game like this, they’re just going to loom at you out of the dark and try to kill you.

So what we’ve attempted to do instead is build, if not characters, then at least character types. The ‘character’ is the Moebian Sixth itself, the regiment, and the soldiers who make it up come in distinctly different ‘flavours’, with different looks and different behaviours. So you might not get to know them on a personal basis, but you’ll get to know their types, and from that, a picture of the Moebian Sixth will quickly build up.

The question, then, is who are they? Well, they’re Imperial Guard, which is to say soldiers of the Astra Militarum. They are - or were - humans, just like you and me. They are the sort of conscript troops who, in other circumstances, would be the heroes of a story, fighting to protect the citizens and unity of the Imperium. They may all be ‘uniform’ because of their, you know, uniforms, but they are individuals, with different skills and strengths, and different flaws and weaknesses.

There’s something chilling and sad about seeing a proud regiment of the Militarum filling the role of the enemy. These men were veterans: brave, well-trained, determined, and tough. Raised, for the most part, on Atoma Prime itself, they were sent away to war, and served long tours in the so-called Fringe War, a pacification campaign that has rumbled on for years in the feral worlds at the edge of the Moebian Domain. There are several Moebian regiments, in fact, but the Sixth is the most famous, the most decorated, and the most celebrated. Back home on Atoma, to the citizens of Tertium Hive, they are heroes. You don’t get lasmen any tougher than the Moebian Sixth.

They have spent their lives (and, in many cases, given their lives) to fight that campaign and keep the people of Atoma, and all the other populated worlds of the Moebian Domain, safe and free from invasion. Though it’s only a small chunk of the unbelievably vast Imperium of Man, the Domain is a significant tract of space. It’s a fiefdom of several important worlds, loyal to the Throne of Terra, ruled over by the Lord Margrave of Atoma. Think of it like a province or a self-governing state. It pays its tithes and taxes to Terra, it obeys the laws of Terra, and it manufactures vast quantities of goods for the Imperium. It’s important. It must not be lost, or invaded, or ever fall to the darkness that lies in the disputed territories it borders. Those territories, which are ‘parts unknown’, wild worlds outside the Imperium’s remit, are a hotbed of alien (“xenos”) and daemonic threat. To the average citizen of Atoma and its sister worlds, the nature of that threat is a mystery. It’s just called ‘the Darktide’, a boogeyman threat that must be kept at bay. That’s why they have the regiments of the Astra Militarum.

The Moebian Domain, like all worlds and world-groups of the Imperium, is responsible for raising, supporting and equipping its own armies, which fall under the auspices of the Astra Militarum. The young people recruited to regiments like the Sixth have no idea where they’re being sent, or what they will face. They are as ignorant of the ‘Darktide’ as any other regular citizen, for they were all citizens themselves.

They quickly learn. The galaxy of Warhammer 40,000 is not a friendly or safe place. There are brutal horrors out there - alien creatures, predators, xenos species, monsters, and worse - who want nothing more than to extinguish the fluttering flame of human civilisation. Out on the death worlds of the Fringe, the lasmen are thrown into the meatgrinder and come face to face with unimaginable danger. Their world-view changes. They learn the nature of the Darktide and fight it tooth and nail.

Sometimes, they learn too much.

Long tours result in trauma, both physical and psychological. Some are broken by the experience. Some are made bitter and resentful that the gruelling combat they experience is generally unrecognised back home, because the Imperial Administratum tends to keep all details of the ongoing conflict quiet so as not to generate public alarm. There might be a few news broadcasts about ‘great victories’, but the rest of the turmoil is screened by propaganda.

Some troopers, of course, serve brilliantly and bravely, and remain loyal. Despite everything they experience. But others fall prey to the insidious touch of the Darktide. They encounter the malevolent effect of the Warp, and it changes them. They become - literally, in some cases - the very thing they are fighting against.

And they fight well. The ‘character’ of the regiment comes from the different units and specialisations. They have fierce melee troops who excel at close range and hand-to-hand. They have storm troops, snipers, flame-troopers, demolition units, heavy-weapon squads. They have everything you’d need in an armed unit if you wanted to take down a world.

So the Moebian Sixth is a regiment that’s turned traitor. They have been corrupted, by the trauma of their experiences, and by the polluting effects of the Warp. The guardians of Atoma have turned - in vengeance and hatred and spite - on the people they guard and the hive that raised them.

Ultimately, they are not just monsters looming out of the dark to kill you. They’re highly trained, highly-experienced veteran troopers, with full military gear. They have been seduced by the creed of the Darktide, and they have come home, not simply to kill and exact vengeance, but - more poignantly - to share the ‘truth’ they have uncovered. They truly believe they’ve seen the light, and that the dark ways they have discovered are far better and more liberating than the stagnant rubrics of the Imperium.  They want to share that truth with you… with you, and every living soul on Atoma.

You don’t get lasmen any tougher than the Moebian Sixth, after all. 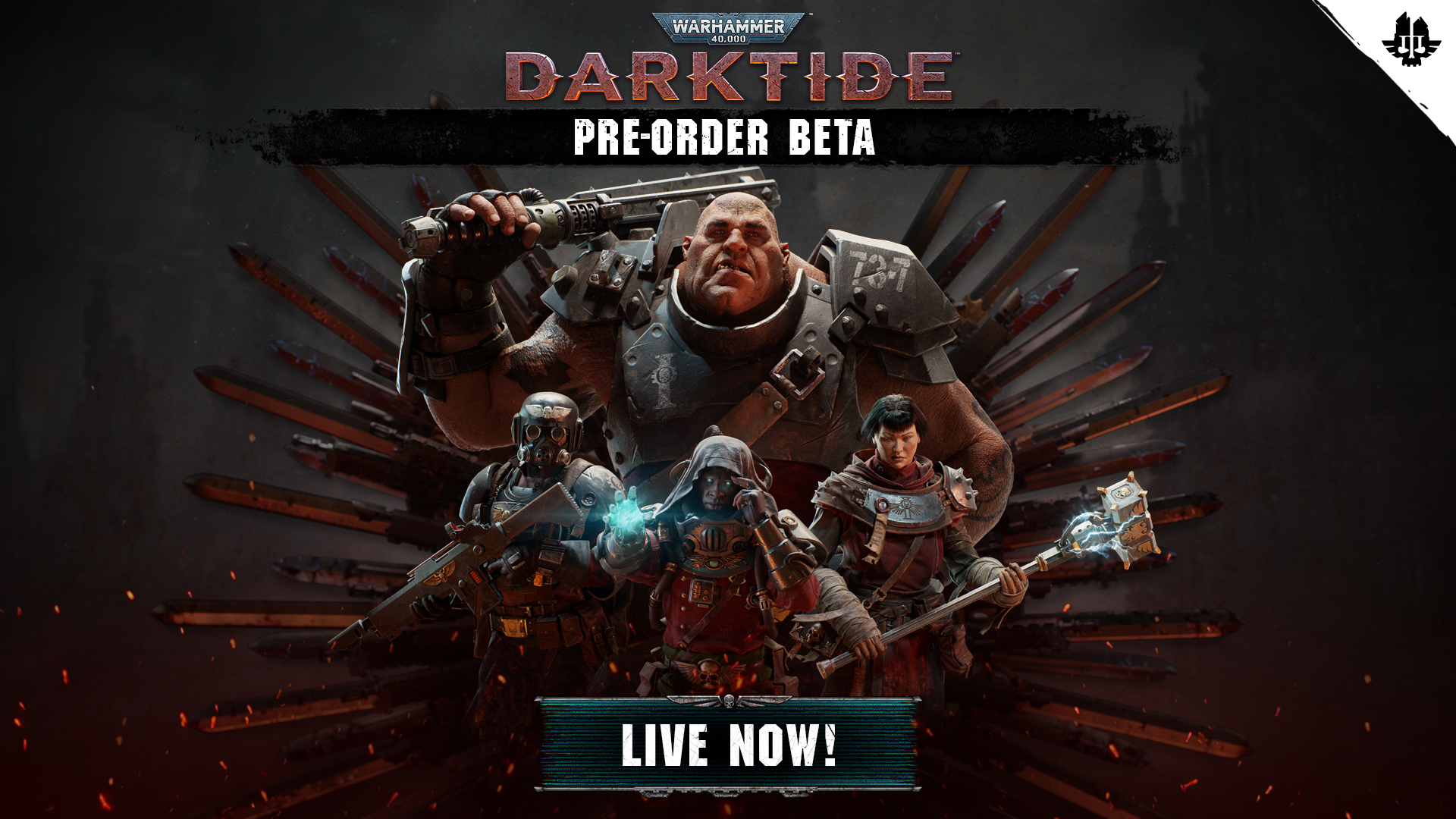 The Darktide Pre-order Beta is live!